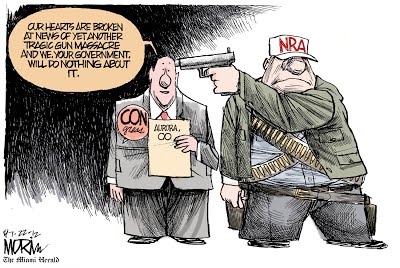 In 2013 Sens.Joe Manchin (D-W.Va.) and Pat Toomey (R-Pa.) made a proposed amendment to require background checks for commercial gun sales, but not for sales between “friends and neighbors” which, makes no sense. However, there were 45 GOP Senators that BLOCKED a “bill that would have been a modest victory for gun control advocates”. Gun control is a policy issue that will dominate the 2016 elections, and there are GOP candidates that have to vote in favor of the lobbyists and NRA in order to have their campaigns financed. Voting against bills that are vital to preventing senseless gun violence is all politics and votes for a group of people whose population is getting smaller. In order to ensure that President Obama gun policy gets passed, we have to and will support it. How can the GOP oppose gun violence, yet they are “pro-life” fighting for the unborn. Why not fight for those who are already living??